IRT. IVRS. IXRS. IWRS. RTSM.
What? Why do we do this
to ourselves?

The pharmaceutical industry, not unlike many others, is full of acronyms. Some are industry recognized, others are specific to internal organizations. Most of the terms are just different flavors of the same thing. Wouldn’t it be nice if the industry could come together and agree on a uniform term?

We’ve been asked why we use agile RTSM (Randomization and Trial Supply Management) instead of IRT (Interactive Response Technology) when we talk about our software. Before I get into the “why” behind our chosen terminology, I wanted to provide some insight into the evolution of the aforementioned acronyms used throughout the history of these critical systems.

To me, IRT is a very general term that could almost be applied to any application you use to enter data and gather information from, including websites, smart phones, etc. Using the term “IRT” is just like saying “system.” 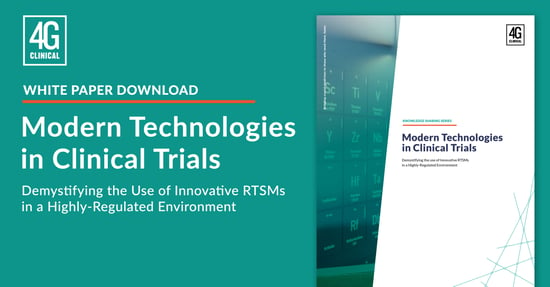 Why 4G Goes By Agile RTSM Instead of IRT?

So, back to the original question at hand. Why would we choose to go with RTSM to describe our offering and add another acronym to the mix?

Well, as much as we would like to take credit for it, 4G did not coin the term RTSM. RTSM has arguably been around since the advent of these technologies, but it refers more to the function of the actual system versus the modality of delivery.

Let’s look at this this way, historically IRT was used primarily for randomization and getting drug to the site. Over the years, it became apparent that supply management was just as critical as randomization and the combined action of them together elevates the function of this system. They are synergistic and need to co-exist. It also helps to bridge the silos between clinical and supply organizations.

There is a treasure-trove of data housed in RTSM systems that can be used to streamline and accelerate clinical trials – both operationally and to enable supply chain optimization. As trials become more complex, it is more important than ever for clinical and supply to be connected.

For more on this topic, view our blog, Three Generations of RTSM.

Fundamentally, we feel the term RTSM more accurately reflects the core function of the system – and this way, we don’t have to invent a new term for every different modality of delivery that comes next – of which we are sure there will be several.